Shortly before the 16th anniversary of the 9/11 terror attacks the Islamic State released the 13th issue of their Rumiyah magazine, published in English and several other languages and distributed across the web in PDF form. Particularly as it was released around the time of America’s most solemn terrorism anniversary, the Daesh magazine remarkably did not include 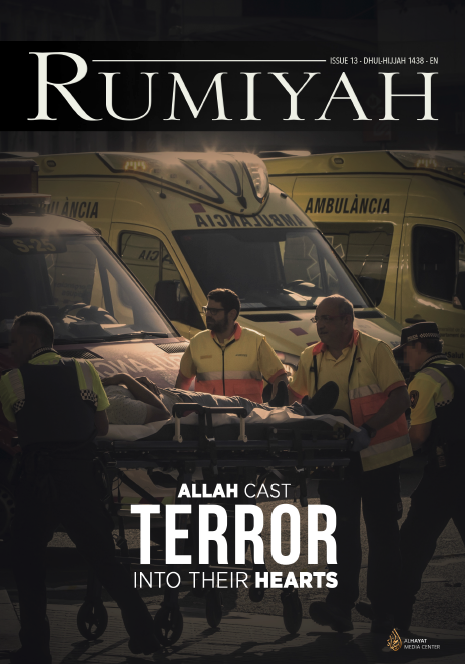 The “Just Terror Tactics,” as Daesh has called past installments, were also absent from the August issue of Rumiyah – in fact, the last time the terror group put an explicit how-to guide for jihadists in the magazine was May, when they suggested using bogus Craigslist ads to lure hostages and murder victims, advised killing a gun shop owner to gain access to the store’s stockpile, and issued a remedial tutorial on vehicle attacks chiding terrorists to pick larger, heavier vehicles to conduct assaults.

In the April issue, Daesh instructed jihadists how to steal cash and send part of the loot to the Islamic State. In January, the tutorial was on arson jihad, with a Dallas megachurch suggested as a target. Their November terror tactics article on vehicle attacks suggested renting a moving van – no small, cheap sedans, they instructed, as those cars wouldn’t do enough damage – and targeting “any outdoor attraction that draws large crowds” as targets, particularly “low security” gathering such as holiday parades, markets, Main Streets or political rallies. (The next month, Anis Amri hijacked a semi-truck, killed the driver and plowed the heavy vehicle into the Christmas market in Berlin, killing 11.) Last October’s issue called for a campaign of random knife attacks targeting small groups or even lone, vulnerable individuals, such as an intoxicated patron stumbling out of a bar late at night or a resident out for an evening stroll in a quiet neighborhood.

Yet the information in the most recent issues of Rumiyah has been largely rote, consisting of religious lecturing, general calls to the responsibility of jihad and rehashing old diatribes of late al-Qaeda in Iraq boss Abu Musab al-Zarqawi. One article with a self-help ring, “Take Advantage of Your Spare Time Before You Become Occupied,” advocates jihadists notching prayer and Quran-study time into their days, “for the spare time which you utilize between your guard shifts is something envied by many from amongst the righteous.”

It’s markedly different from the August al-Qaeda in the Arabian Peninsula issue of Inspire magazine, which continues to be the gold standard in speaking to would-be jihadists in the language of West and supplementing this encouragement with chillingly detailed step-by-step pictorials for constructing terror devices at home. Al-Qaeda introduced their foray into targeting passenger trains, preferably high-speed ones, and cargo rail, preferably carrying hazardous materials. Several pages of instructions in the Inspire issue showed how to make an explosive-free derailment tool from rebar, concrete, sheet metal and rubber to clamp onto a track in a remote, unpatrolled area about 10 minutes before a train is scheduled to pass. AQAP even mapped out specific rail lines to target in the United States.

Daesh, meanwhile, has continued to issue propaganda materials – some intended to shock with their gore, some intended to gloss over their expanding battlefield losses with action-film production values – but isn’t making the same effort toward practical at-home training of would-be terrorists, even as they still encourage westerners who would have migrated to the Islamic State to stay home and wage jihad on their turf instead. Granted, they have their hands full: Syrian Democratic Forces Commander Rojda Felat estimated this week that Daesh has lost about 70 percent of Raqqa to her formidable fighters.

Daesh’s sinking efforts at long-distance terror training coincide with their physical caliphate crumbling and the push to set up shop in new locales – evidenced by a recent Daesh video highlighting their recruits in the Philippines. The Islamic State is moving into its post-caliphate phase, morphing into a stateless actor, and is likely embracing to a greater degree the concept of universal jihad: acknowledging and embracing lone jihadists poaching the best tips and training from any terror source and then claiming loyalties that don’t necessarily match the training source. Al-Qaeda, which has proven to the distance runner as compared to Daesh’s furious sprint, is happy to pick up the slack to aid would-be terrorists.