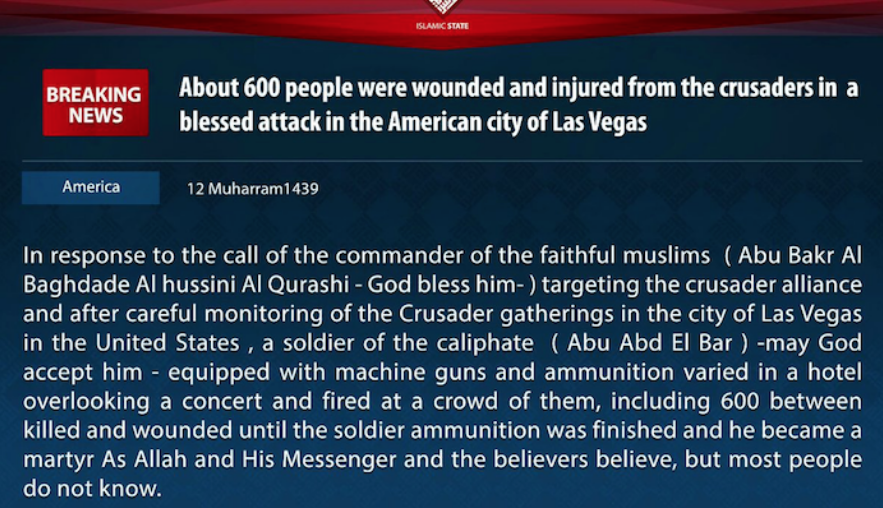 The Islamic State didn’t just quickly claim the 01 Oct. massacre of concert-goers in Las Vegas, but has been jumping up and down, frantically waving a banner and shouting through a bullhorn that shooter Stephen Paddock was their “soldier.” Even as there’s still no apparent red flashing light that points to the Mesquite, Nev., resident having anything to do with Islamist ideology or 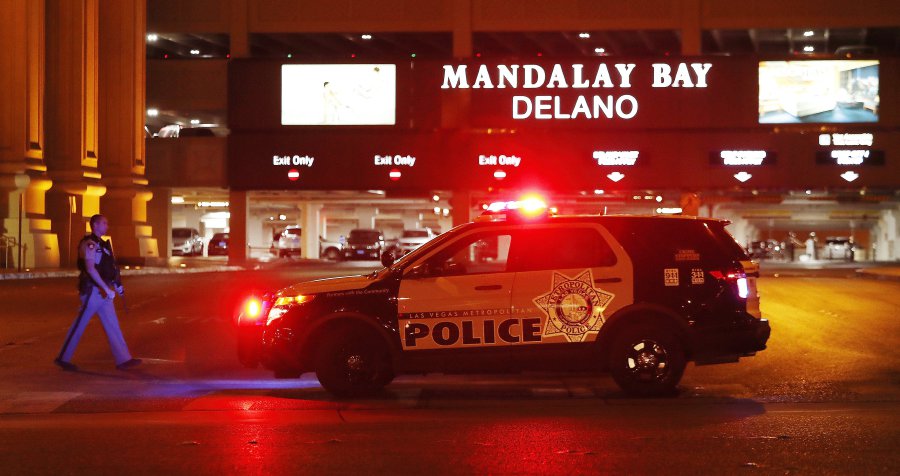 jihad aspirations, Daesh has doubled, tripled and quadrupled down on their claims in the span of a few days – and it’s not without strategy on the part of the caliphate.

The first claim from Daesh was issued the morning after the shooting through their Amaq news agency, claiming that the “Las Vegas attacker is a soldier of the Islamic State who carried out the attack in response to calls for targeting coalition countries.” They claimed Paddock – who has not been described as political or religious by his family and, to this point, investigating authorities – had converted but didn’t provide any more details.

In a follow-up communique on their official Nashir channel, Daesh bestowed a nom de guerre on Paddock – “Abu Abdul Barr al-Amriki” – and described his attack with information readily available in news reports. That was followed by a short video from the Daesh-affiliated al-Batar Media Foundation describing the attack as “Just Terrorism” – the favored Daesh term for lone jihad. Then, the weekly al-Naba newsletter that traditionally focuses on activities within claimed Daesh provinces and is geared toward internal distribution published a full-page Vegas attack infographic on 5 Oct. claiming Paddock converted to Islam six months ago.

In Vegas on 4 Oct., FBI Special Agent in Charge Aaron Rouse told reporters, “We have found no evidence to this point to indicate terrorism, but this is an ongoing investigation. We’re going to look at all avenues, not close any.” Senate Intelligence Committee Chairman Richard Burr (R-N.C.) told reporters at a 04 Oct. news conference, “At this point, I’m glad to say that it doesn’t seem to have a terrorism nexus.”

Daesh has doubled, tripled and quadrupled down on their claims in the span of a few days – and it’s not without strategy on the part of the caliphate

There are a few things that don’t add up with the Daesh claims, besides the lack of any evidence such as a video testimonial or even recording capability on the cameras positioned around Paddock’s Mandalay Bay room for surveillance. 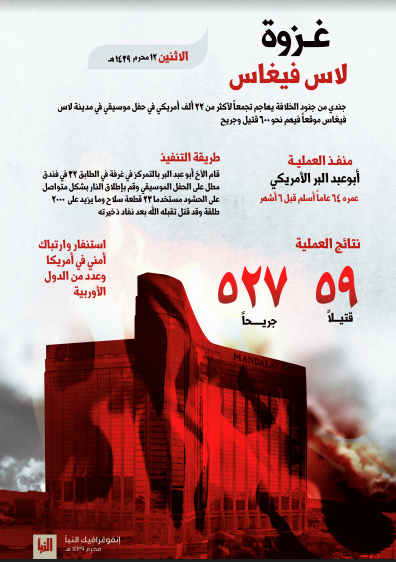 Daesh has continued to insist that Paddock ran out of ammunition and was “martyred,” when leaked crime scene photos and law enforcement corroboration describe numerous loaded high-capacity magazines still available for the shooter to have used. Paddock had no known social media presence, which would put him outside the stratosphere of Daesh’s favored recruiting and grooming medium. The shooter was also a high-stakes gambler who reportedly went on an eight-hour binge the night before the massacre; his hair stylist also reported that he consistently stank of booze. Not that Daesh wouldn’t be happy to have a swilling gambler – anyone, really – committing such a vicious attack in their name, but there are no signs that Paddock had converted to a pious lifestyle or exhibited a change in religious observance.

If there is proven to be no terror link, why has ISIS latched itself to the Vegas shooting and refused to let go?

At a time when Daesh is being battered on their home turf in Syria and Iraq, they’re yearning for the summer of Omar Mateen

First, they’ve already got the conspiracy theorists in their corner, convinced that the government is hiding something or, in the world of false-flag narratives, had a hand in the crime. Paddock’s shady life is only fueling beliefs being spread on social media that he must have had political or jihadist ties that are for some reason being covered up. The Daesh drumbeat keeps stirring up that fear and accomplishing an objective of the terror group – wanting to project their power in such a way that Americans are constantly looking over their shoulder for the Islamic State, preferably coupled with economic disruption and crippling security enhancements.

But especially at this moment in the terror group’s history, it’s a critical matter of recruitment. At a time when Daesh is being battered on their home turf in Syria and Iraq, they’re yearning for the summer of Omar Mateen. Daesh drew lots of mileage out of the Pulse nightclub attack, which up until Sunday was the deadliest mass shooting in modern U.S. history – not a “record” ISIS wanted to let go. They went so far last year as to release a promotional package in an executable file that included all videos, official and unofficial, on the Orlando shooting as well as graphic memes lauding Mateen that were the perfect size for tweeting.

And the terror group, which was undoubtedly impressed by the scope of Paddock’s preparation and his decision to turn a 32nd floor hotel room into a sniper’s nest, already has the copycat bug. The Wafa’ Media Foundation, an ISIS-supporting group that issued a justification for the Manchester concert bombing in May and used the June fire at Grenfell Tower to call for jihadist arson attacks, issued a memo calling on lone jihadists to emulate Paddock and wage attacks in the West. ISIS is clearly bitten by a case of “wish we’d thought of that” – and now they’re trying to turn jihadists toward being that enterprising.