A planned sustained protest action centered in the nation’s capital this week promises to broaden in size and scope if the Trump administration ends the Obama-era program that protects from deportation certain immigrants brought to the United States as children. The intersection of these movements may also heighten the risk for clashes with the alt-right movement and anti-immigration activists, with the potential for vandalism or violence as well as economic disruption previously utilized by the immigrant-rights movement.

Protesters who plan to join the DC “takeover” are being asked to prepare for the long haul by packing toiletries, a sleeping bag, rain gear and all-weather clothing, and organizers promise to hold “daily nonviolent direct action trainings available to all and required for those committing civil disobedience and risking arrest.”

Over Labor Day weekend, Politico reported that the Trump administration will announce the end of the Deferred Action for Childhood Arrivals (DACA) program with a six-month delay 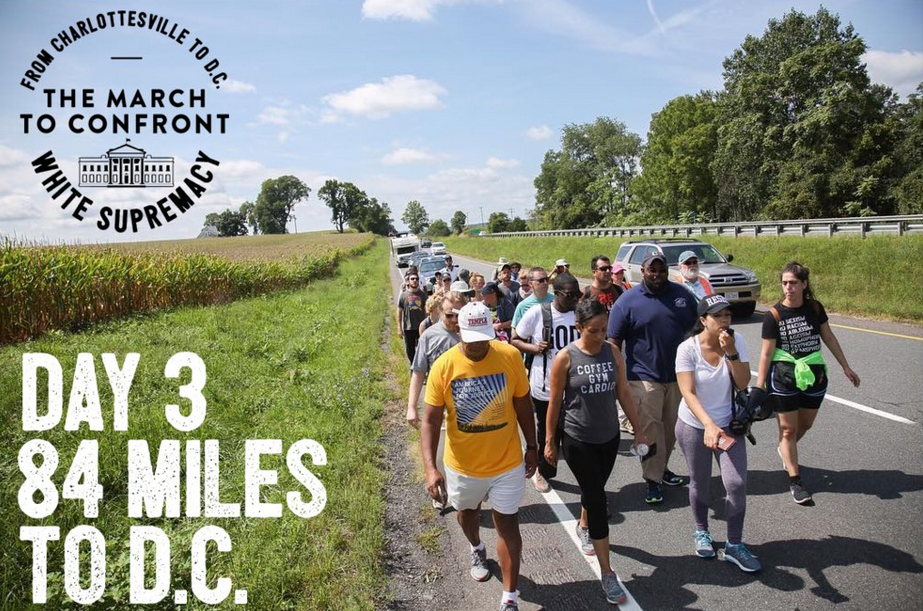 reportedly intended to give Congress, which has punted on immigration reform many times in the past, a chance to come up with a solution. Republican Rep. Mike Coffman (Colo.) vowed on Twitter before and after the story broke to file a discharge petition – a rarely used congressional maneuver to force a floor vote on a bill that hasn’t been brought out of a committee – on 05 Sept. to protect DACA, and its nearly 800,000 undocumented beneficiaries, for three years.

On their own, immigration protests have not traditionally been linked with serious domestic unrest such as vandalism and violence, and the crowd sizes haven’t altered this dynamic as seen with the millions who marched through American cities with little incident in 2006. There were counter-protests during that era, often linked to the Minutemen movement that conducted armed civilian patrols at the southern border.

On their own, immigration protests have not traditionally been linked with serious domestic unrest such as vandalism and violence

Immigration protests have largely focused on economic disruption, as seen during February’s “A Day Without Immigrants” strike – a resurrection of the same-named 2006 labor action. About 100 workers lost their jobs this year as a result of the protest, while some other businesses, particularly restaurants, closed in solidarity with immigrant workers.

Corporations have also signaled support for DACA, with nearly 400 executives including the chiefs of Apple, Microsoft, Facebook, Amazon, Netflix, Hewlett-Packard, PayPal, Uber and Visa sending an open letter to Trump and congressional leaders last week asking that the program be preserved and that lawmakers pass the DREAM Act or similar legislation. “Unless we act now to preserve the DACA program, all 780,000 hardworking young people will lose their ability to work 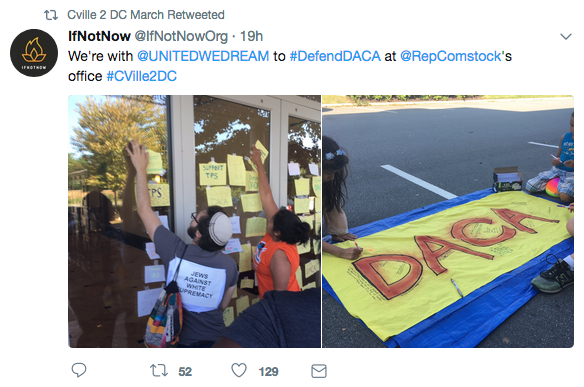 legally in this country, and every one of them will be at immediate risk of deportation,” the business leaders wrote 31 Aug. “Our economy would lose $460.3 billion from the national GDP and $24.6 billion in Social Security and Medicare tax contributions.”

The conflux of events could set the stage for a volatile week, as the Charlottesville to DC “March to 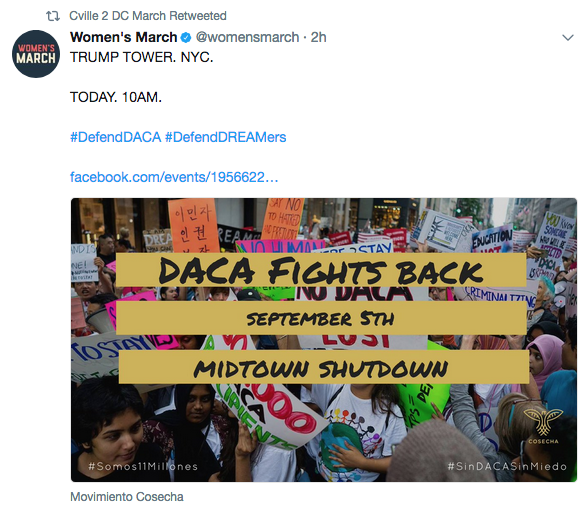 Confront White Supremacy” is set to arrive in Washington to establish a sustained protest centered on the vow to “launch wave after wave of civil disobedience demanding Trump be removed from office and that we begin to heal our nation’s wounds of white supremacy.” This coincides with the return of Congress from the summer break to buckle down on trying to reach a funding agreement to avert a government shutdown at the end of the month. Additionally, antiwar activists are responding to escalating tensions with North Korea, discontent that could also escalate to demonstrations. It is also expected that related and solidarity events may occur in other parts of the country during the week.

The Charlottesville to DC march was briefly brought to a halt close to their daily scheduled stopping point last week when organizers heard there was a man with a gun at a McDonald’s along their Route 29 path in Madison County, Virginia. State police declared the man was legally carrying a weapon and officers were aware of his presence; they determined he was not directly threatening the protesters. March organizers said in a statement, “This threat is a clear example of why we need more people to stand with us in this fight against white supremacy and hatred.”

Along the protest route in Warrenton, Va., as many as 75 fliers bearing the web address of the neo-Confederate group Identity Dixie were found posted around town early Saturday, including a photo of white children with the words “we have the right to exist.” The SPLC says Identity Dixie is a “southern alt-righter” site registered in January after an internal alt-right rift 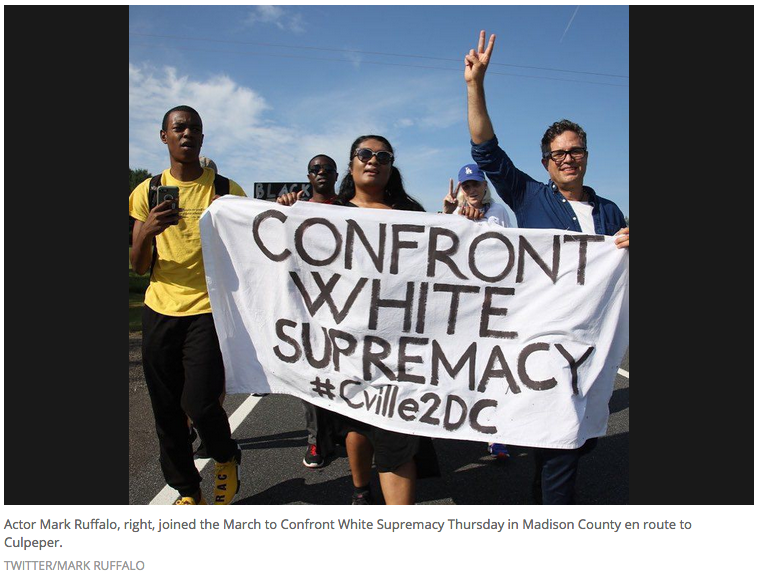 Activists on Twitter have been calling for the causes to converge in DC, rallying DACA supporters to meet the marchers when they arrive in Washington on 06 Sept. There has been crossover protest along the way, as dozens of CVille2DC activists joined United We Dream activists Monday outside the office of Rep. Barbara Comstock (R-Va.) to call on the congresswoman to defend DACA.

Protesters who plan to join the DC “takeover” are being asked to prepare for the long haul by packing toiletries, a sleeping bag, rain gear and all-weather clothing, and organizers promise to hold “daily nonviolent direct action trainings available to all and required for those committing civil disobedience and risking arrest.”