Heated protests that have lulled since the deadly white nationalist rally in Charlottesville will be rekindled this month as activists launch sustained demonstrations at the doorstep of the president. While most events are planned as peaceful demonstrations, recent rallies, protests, and counter-protests have demonstrated the potential for broader security concerns. As attention shifts from the devastation of Hurricane Harvey and as demonstrations and other protest activities regain attention, the potential for escalation, vandalism, and deliberately planned acts of violence, to include low-tech terrorism, remain a concern.

“We will hold our ground and launch wave after wave of civil disobedience demanding Trump be removed from office and that we begin to heal our nation’s wounds of white supremacy,”

As the news cycle was focused on Harvey’s destructive path in Texas and Louisiana, marchers set off from Emancipation Park, site of the 12 Aug “Unite the Right” rally that culminated in the death of one counter-protester. The Charlottesville-to-Washington DC “March to Confront White Supremacy” began 28 Aug and has been inching toward the nation’s capital in daily increments through Virginia ranging from three to 18 miles at a time. Interested marchers were asked in the online registration form to “commit to maintain nonviolence discipline at all times.” 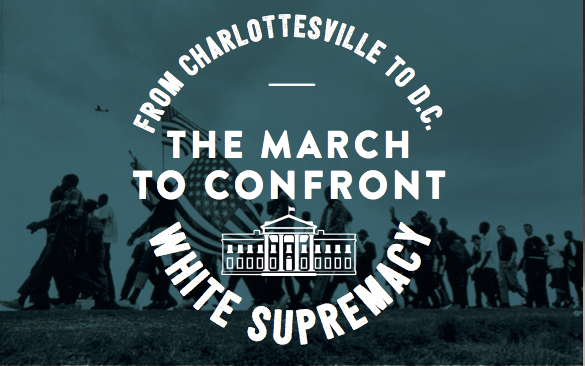 “We are answering the call from faith and community leaders in Charlottesville to dismantle white supremacy in our country by taking their demand for moral leadership to Washington, DC,” said march organizers. Participants include community activists, clergy, and equality activism groups, including the Women’s March that swelled DC with protesters after Inauguration Day.

The march is also resurrecting demands made of the city of Charlottesville at the time of a 08 July Ku Klux Klan rally in support of preserving the controversial Robert E. Lee monument. Solidarity Cville asked city leaders to revoke the “Unite the Right” permit for the 12 Aug rally, and are now accusing the city of having blood on its hands for not responding adequately to fears that the white nationalist event would spark violence. Among what march organizers call the Charlottesville Demands is the request for Mayor Mike Signer to step down, the removal of all Confederate monuments and the dropping of all charges against 22 counter-protesters from the 08 July KKK rally. They also have a number of broader racial justice demands tied to the criminal justice system.

The march is scheduled to end on Wednesday, 06 Sep, in Washington, when organizers say their protest action will be “taking over” the District. Congress returns to DC from the summer recess the previous day.

“We will hold our ground and launch wave after wave of civil disobedience demanding Trump be removed from office and that we begin to heal our nation’s wounds of white supremacy,” organizers vow.

The full details of this sustained action haven’t been released, but organizers are offering free housing for protesters and asking on the registration form if they’re willing to risk arrest or not through acts of civil disobedience. DC protesters are asked to commit to the same nonviolence pledge as the marchers from Charlottesville. Volunteers are sought in areas including legal support and observers. Demonstrators are also asked to check off which days they’ll be on the ground, offering checkboxes through 12 Sep – with the notation that it’s not a complete list of dates. White nationalist Richard Spencer is currently working through legal channels to be allowed to speak at the University of Florida on 12 Sep.

Another protest event, scheduled for 23 Sep, will bring diverse demonstrators – organizers promise Black Lives Matter activists, law enforcement officers active in community policing, business leaders, Black Panther Party founders, and athletes including Seattle Seahawks defensive end Michael Bennett – to DC’s Lincoln Memorial for the “March for Civility” or “Peace March.” Organizers say the rally will focus on “inspiring messages from public figures that are known nationally for their good works and bringing people together.” It is billed as a four-hour event instead of a sustained protest action.

Depending on the momentum of these protest actions and other demonstrations – particularly the march culmination that doesn’t currently have an end date – as well as the DC police response and anticipated counter-protests, fresh protests may spread to other cities. Discontent at these protests could be magnified by legislative or White House actions related to the appropriations process that will be consuming Capitol Hill throughout September as a government shutdown looms at the end of the month.