The tragedy that occurred in Parkland is in some ways very simple and other ways, quite complex. The ongoing investigation will address some of that, though a lot will be missed in the noise that is modern American politics and media. A far less consequential tragedy is that events like this get rapidly politicized, very important lessons learned can be missed, and some wildly incorrect things can be said. Among those wildly incorrect things, on 22 Feb, President Trump stated that, “active shooter drills is a very negative thing, I’ll be honest with you. I mean, if I’m a child and I’m 10 years old, and they say, we’re going to have an active shooter drill, I say, ‘What’s that?’ ‘Well, people may come in and shoot you.’ I think that’s a very negative thing to be talking about, to be honest with you.” Oh boy, Mr. President. Please, stop. Let’s look at that horribly short-sighted comment and two other aspects of preparedness that should be appreciated in light of the terrible attack in Florida.

Deputy Scot Peterson, who has resigned after being suspended, was on-site, armed and in uniform, when the shooting took place but, “arriving at the building where the shooting broke out about 90 seconds after the first shots were fired… he remained outside for about four minutes… Asked what Mr. Peterson should have done, Sheriff Israel said: ‘Went in, addressed the killer, killed the killer…’”

Also on 22 Feb, Broward County, Florida, Sheriff, Scott Israel reported that an armed officer was assigned as the school resource officer for the Marjory Stoneman Douglas High School, where the recent active shooter attack took place, resulting in the death of 17 individuals. Deputy Scot Peterson, who has resigned after being suspended, was on-site, armed and in uniform, when the shooting took place. For as yet unconfirmed reasons, the officer failed to respond – he did not intervene during the attack. Sheriff Israel stated that there is video footage (which has not been released due to the active investigation) showing Peterson “arriving at the building where the shooting broke out about 90 seconds after the first shots were fired, and that he remained outside for about four minutes… Asked what Mr. Peterson should have done, Sheriff Israel said: ‘Went in, addressed the killer, killed the killer…’ Sheriff Israel said Mr. Peterson had not given a reason for why he did not go into the building where the shooter was. It is unclear if he will face charges” (BBC).

Unprepared personnel may not always know their duties and expected actions during an incident, or, for any number of reasons, may not perform to standard when a real incident occurs. At this time, we don’t know why Mr. Peterson failed, and don’t need to speculate. But for whatever reason, he did fail. Effective response is more likely when individuals have experience in performing their expected duties. This can be developed through real-world response actions and experience, and through a thorough an understanding of plans and procedures, proper training, and realistic exercises. Leaders – in business, in education, places of worship, and, say – the President of the United States… – are encouraged to consider how confident they are in their security teams’ readiness to respond to hostilities. If unsure, it may be an excellent time to develop or update procedures, conduct refresher training, and to validate training via exercises. I imagine that the President wants his Secret Service personnel to know the plans and procedures for dealing with hostile events, such as, say a woman driving her car into the White House security barriers on Friday afternoon…

“The caller provided information about Cruz’s gun ownership, desire to kill people, erratic behavior, and disturbing social media posts, as well as the potential of him conducting a school shooting. Under established protocols, the information provided by the caller should have been assessed as a potential threat to life… We have determined that these protocols were not followed…”

Another failure in this attack was a the failure by the FBI to act on a reported concerns about the attacker. To be fair, this was a much broader failure – by people that knew the attacker, by school personnel, by local law enforcement, and the FBI. On 16 Feb, the FBI took ownership of their failure to follow procedure noting that, “a person close to Nikolas Cruz contacted the FBI’s Public Access Line (PAL) tipline to report concerns about him. The caller provided information about Cruz’s gun ownership, desire to kill people, erratic behavior, and disturbing social media posts, as well as the potential of him conducting a school shooting. Under established protocols, the information provided by the caller should have been assessed as a potential threat to life. The information then should have been forwarded to the FBI Miami Field Office, where appropriate investigative steps would have been taken. We have determined that these protocols were not followed for the information received by the PAL…”

That failure demonstrates the importance of having plans and procedures in place, personnel understanding their responsibilities and expected actions, and the need to conduct routine training and validation through exercises – to include those pesky drills the President doesn’t like – to ensure that when an incident occurs, individuals and organizations are ready to respond effectively. Whether a fire drill, responding to a bomb threat, dealing with an active shooter, or any number of physical and cyber incidents, leaders need to ensure their organizations, and the people they are responsible for, are prepared to deal with the most concerning situations they may encounter.

On 22 Feb, President Trump met with state and local officials, as well as members of his Cabinet, and made remarks about how to make schools safer. The President advocated for background checks, mental health facilities, arming teachers, and other ideas. He also stated that he doesn’t believe In conducting active shooter drills at schools. Out of respect, and for proper context, those remarks are included below.

Commissioner Stewart raises some very good points. The President… er, in that comment, not so much.

For the President, and other parents that may want to try to explain this to their children, I would not suggest using the phrase, “Well, people may come in and shoot you,” as the reason for conducting hostile events, or active shooter, exercises. Consider something more along the lines of:

“Barron, your school is going to conduct some hostile events drills this week. Even though, like a fire, it is very unlikely that you will ever have any kind of bad guy attacking anyone at your school, unfortunately, people sometimes do bad things and it’s important that we know what to do if something happens. The same ideas you’re going to practice at school also make sense if we’re out shopping, or at the movies, or anywhere, so I want you to pay attention, and let’s talk about what you did after. I love you, and don’t want you to worry about this, but I do want you to know what to do if something happens.”

That’s free, no credit needed; feel free to use that, Mr. President.

Whether the police officer at the school, the individual receiving a suspicious activity report, or an individual caught in a bad situation, we need to know what to do, where to go – how to respond. We need to have a plan, it should be practiced, and it should be validated in exercises. It’s for that reason that the government – the FBI, DHS, state, and local – has spent so much time studying active shooter attacks and developing materials and training programs to prepare organizations. Its why universities are developing videos and references for their students and faculty, its why our team and our partners have developed the Hostile Events Preparedness Program. At the individual or family level, maybe you don’t know where to start. My colleague, James DeMeo, has made it easy for you. He’s written a simple book titled, “What’s Your Plan?” with background, context, and discussion points for you to 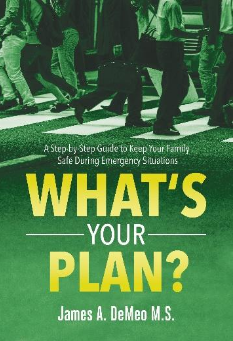 consider when going out, at school, and at work.

A recent YouGov poll found that only one in ten Americans has taken any kind of active shooter training. Given the debate about guns in schools, gun control, hardening buildings, terrorism, and extremism, you’d think more than 10% of the population would take a few hours and get familiar with simple approaches to becoming more prepared. And that needs to happen – at our places of work, at our schools. We can’t – as free citizens, we don’t want – our public places to seem like military garrisons or nuclear plants. Reasonable hardening is fine – the professional sports leagues are finding great ways to do that while keep events fun and safe. But there is a very important role for a proper level of preparedness. This isn’t about fear – no one wants to scare little Barron, and always question anyone selling any kind of security based on selling fear – this is about personal responsibility. Attacks can come by gun. Or an explosive, or a knife, or a bat… the point is know what to do. These things happen, be prepared. But don’t be scared. In reality, you are far more likely to be injured due to something stupid, like texting while driving, than by a hostile event.

Nearly 330,000 injuries occur each year from accidents caused by texting while driving. In 2014 and 2015, the FBI has 40 Active Shooter incidents recorded, with 231 total casualties.

The statistics above aren’t meant to minimize the threat of active shooter incidents or other acts of violence. Attacks are very serious, with severe consequences and life-ending and life-impacting effects on those that area attacked, their families, friends and communities. But, threats need to be understood in context, realistically, and properly addressed. In a free society, where people can come and go easily, unencumbered by burdensome and invasive security, and are able to maintain privacy, there will always be dangers, and bad people doing bad things. But, safety and security are both a personnel and collective responsibility, just like being a citizen in our republic, and when we take them seriously, we can enjoy ourselves and get back to that individual pursuit of happiness.

decision-making cycle to help inform time-sensitive decisions effecting operations, security, and resources. We provide clients with routine cyber and physical security products tailored to the individual client’s interests.  Such products include relevant analysis, assessments, and mitigation strategies on a variety of topics.