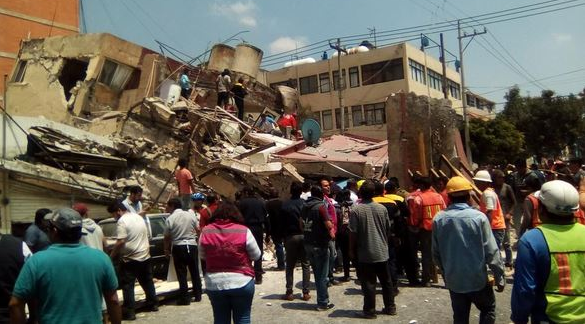 The 19 Sept. magnitude 7.1 earthquake centered southeast of Mexico City, which caused select buildings to crumple and even explode, was a sobering reminder of the seismic risks here in the United States, including pressure-heavy fault lines that worry scientists and industrial operations believed to have contributed to temblors in locations that didn’t used to be so restive.

The 1:14 p.m. quake meant that Mexicans were awake and better able to respond to the danger, but it also caught children during school hours. The death toll had climbed to nearly 250 by this morning, with 22 bodies of students and teachers discovered in an elementary school that collapsed. This event follows the 07 Sept. M8.1 incident, marking two powerful earthquakes within weeks of one another.

Two hours before the 19 Sept. quake, Mexicans participated in a disaster drill timed to coincide with the anniversary of 1985’s magnitude 8.0 quake that killed nearly 10,000.

In 2016, the U.S Geological Survey began releasing yearlong earthquake forecasts that calculated potential hazards not just based on natural Earth movement but also “human-induced” quakes, largely spurred by wastewater injection in oil and gas ops in the central and eastern United States – particularly in Oklahoma and southern Kansas. The 2017 forecast, released in March, said a decrease in wastewater injection, which increases underground pressure, maybe have contributed to fewer quakes in 2016 – however, Oklahoma also saw its largest-ever recorded shaker, a magnitude 5.8 on 3 Sept., 2016; 21 Oklahoma quakes last year registered over magnitude 4.0. Mark Petersen, chief of the USGS National Seismic Hazard Mapping Project, said there is “still a significant likelihood for damaging ground shaking” in the region.

“The forecast for induced and natural earthquakes in 2017 is hundreds of times higher than before induced seismicity rates rapidly increased around 2008,” said Petersen. “Millions still face a significant chance of experiencing damaging earthquakes, and this could increase or decrease with industry practices, which are difficult to anticipate.”

On the same day as the Mexico City quake, the USGS recorded five small quakes in California, three in Alaska, one in Idaho, three in Oklahoma and a magnitude 3.8 temblor near Albion, Illinois.

West Coast seismic action is a given considering the meeting of the Pacific and North American plates at the San Andreas Fault, in addition to thousands of smaller faults that dissect the West. The 1989 Loma Prieta quake, epicentered 60 miles from the Bay Area, caused $7.4 billion in damage and 63 deaths – including 42 in the infamous pancaking of a two-tier section of Interstate 880 in Oakland. The magnitude 6.7 Northridge earthquake in 1994 killed 57 and caused more than $20 billion in damage: drive through the Newhall Pass today and you’ll see the sign marking the Clarence Wayne Dean Memorial Interchange, honoring the LAPD motorcycle cop who fell to his death off the dramatically severed Interstate 5 connector.

The Uniform California Earthquake Rupture Forecast, produced by the USGS and partner agencies, said in its most recent assessment two years ago that the state stands a greater than 99 percent chance of getting hit by an earthquake at least as large as Northridge over the next 30 years – that breaks down into a 93 percent chance for Southern California and 95 percent

probability for the northern part of the state.

Reflecting how slowly time moves in Earth Years, scientists are less concerned about the northern San Andreas “partly because of the relatively recent 1906 earthquake on that fault.”

As far as where, the forecast notes that scientists still haven’t discovered all of the state’s fault lines – more than 500 are known and active in California – so a temblor could pop up in an unexpected place. Indeed, reevaluation of existing fault maps led researchers to warn in March that a pair of fault lines running from Los Angeles to San Diego were capable of unleashing magnitude 7.4 fury on the heavily populated corridor. Earthquake preparedness advocates continue their warnings as they 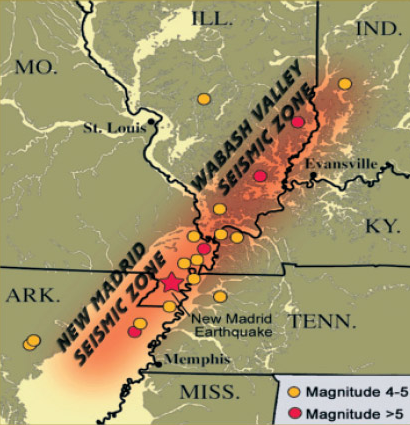 encourage Americans to plan for potential massive events like an earthquake in the Cascadia Subduction Zone or the New Madrid Seismic Zone, an event FEMA exercised as the focus of National Level Exercise 2011.

Preparing for an earthquake includes securing items around the house that could be damaged or cause injury during a quake – L.A. natives think twice before hanging a heavy frame above the bed – and ensuring seven days of food and water are ready to go. Retrofitting and/or earthquake insurance may be appropriate for some homes and establishments.

Organizations can register now for International ShakeOut Day on 19 Oct., a vast earthquake preparedness drill sponsored by FEMA and USGS. Two hours before the 19 Sept. quake, Mexicans participated in a disaster drill timed to coincide with the anniversary of 1985’s magnitude 8.0 quake that killed nearly 10,000. After the real thing shook them out of drill mode, Mexicans banded together to rescue the buried and clear chunks of debris with bucket brigades.