Introduction. At Gate 15, we believe that to properly assess risks and effectively plan and conduct preparedness and operational activities one must start with a firm understanding of the threat environment. We strive to help that through our free daily report, the Gate 15 SUN, and blog posts and for our clients through tailored analysis.  To inform our efforts, we collect information from literally thousands of sources, with one of our favorites being the timely and clever posts by Bridget Johnson. 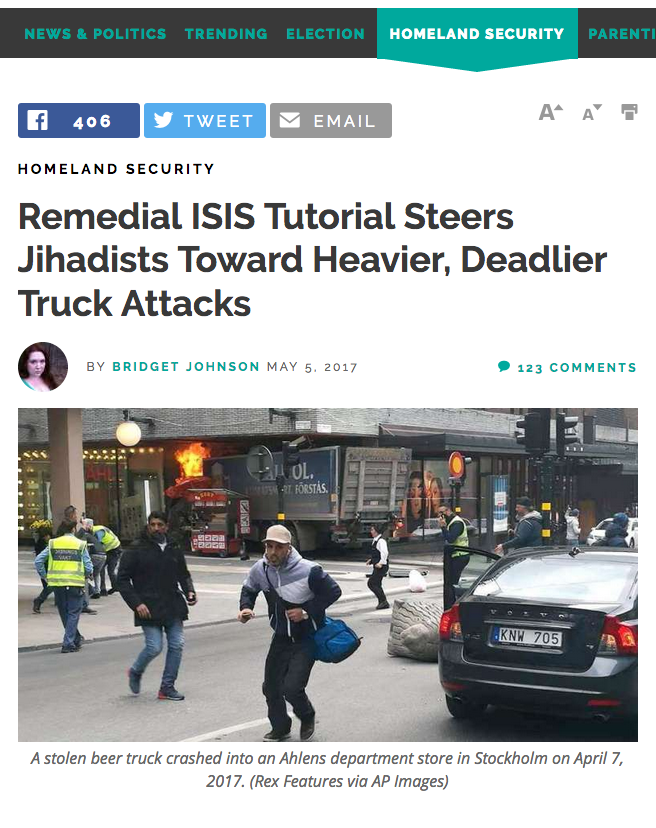 Bridget is a veteran journalist whose news articles and opinion columns have run in dozens of news outlets across the globe and presently serves as Washington Editor for PJ Media. Coming from California, Bridget first came to Washington, DC, to be online editor at The Hill, where she wrote The World from The Hill column on foreign policy. Previously she was an opinion writer and editorial board member at the Rocky Mountain News and nation/world news columnist at the Los Angeles Daily News. Today, she a Senior Fellow specializing in terrorism analysis at the Haym Salomon Center and an NPR contributor who has contributed to USA Today, The Wall Street Journal, National Review Online, Politico, New York Daily News, The Jerusalem Post, New York Observer, RealClearWorld and more, as well as numerous television and radio appearances. Click here for the newest from Bridget and PJ Media. The following interview was conducted with Bridget by Gate 15’s Andy Jabbour.

Bridget, I’ve been a fan of your writing and analysis for a while now and really appreciate both your sound perspective and the non-alarmist but candid approach you take to your writing. You spend a lot of time looking at the same security and terrorism concerns I do. What are the top two or three security concerns you see facing the United States domestically right now? Let’s face it, ISIS is going to fall short of their apocalyptic goal of sacking Rome by 2020. We know that the Islamic State with its hubs of Mosul and Raqqa is falling piece by piece, and we’re already seeing the evolution of jihad that will take the most successful elements of Abu Bakr al-Baghdadi’s experiment and mesh them with what has steadily worked for al-Qaeda. Post-caliphate, we’ll see this diffuse threat intensify with dark web operations, recruiting in the tiniest corners of the country and this ideological crowdfunding of jihadist ideas and methods. ISIS’ physical caliphate hasn’t been the heart of their operation for a while now. Spreading out by necessity has basically aligned them with al-Qaeda’s strategy, and al-Qaeda has lauded and published analysis of ISIS-claimed lone jihadist attacks while stressing that all jihad is good no matter which group gets the credit. So this trend toward universal jihad will keep us on our toes and make declarations of victory after the fall of Raqqa short-lived – it will be wonderful when everyone in Iraq and Syria is liberated from ISIS control, but that just means we’ve moved to the next, far-flung phase.

Another big concern is the challenge of intercepting the un-Islamic Islamic extremist terrorist. We’ve seen some common threads in the profiles of Western lone jihadists, including marked changes in their degree of religious observance, past incidents of domestic violence and even an interest in the law enforcement profession. But ISIS has increasingly embraced terrorists who really aren’t religious and do everything they deem “haram” – they just brush it off as a committed jihadist deep undercover, like Omar Mateen, but the truth is they really don’t care if homegrown jihadists know their Quran or smoke weed as long as they kill. Even al-Qaeda in the Arabian Peninsula leader Qasim al-Raymi recently said, “Jihad is with all, pious and immoral.” Working with neighborhood mosques won’t catch this variety of jihadist because they’re not going to mosque. Spotting and intercepting these types of terror recruits requires more of a gang interdiction mindset and strategy, because gang principles are what’s being used to reel in these types and entice them to act. It underscores how important criminology is in counterterrorism.

You’ve been observing the threat of Islamic extremism for a long time. How have you seen the threat morph over the years and what concerns you most about what you’re seeing today? I’m concerned most about the intense laser focus on ISIS in the public and political consciousness even as we’re evolving into the post-ISIS era. The Islamic State paved new ground in online recruitment and has shocked the world with the gruesomeness of their crimes, but they also reached too far, too fast and the caliphate is fizzling. Meanwhile, al-Qaeda and other groups have maintained their discipline and evolved their organization, offer more user-friendly tutorials and have closely analyzed what has worked and what hasn’t for ISIS. When ISIS tells would-be jihadists to attack, al-Qaeda tells them how to attack. Even when terrorists claim ISIS inspiration, they’re frequently using open-source operational instructions from al-Qaeda and citing lectures from Anwar al-Awlaki. Al-Qaeda is ready for ISIS’ fall.

I’m also concerned about the lack of emphasis on terrorism being a borderless threat. Security measures for entrance into a country will always be important as one of many lines of defense against terrorism, but the terror paradigm has shifted to recruiting the born-and-bred – and not just because of immigration restrictions, as terror groups want operatives who know the language and customs firsthand, who don’t arouse suspicion, who work in careers connected to vulnerable industries, who don’t need to travel. ISIS calls homegrown operations “just terror,” al-Qaeda calls it “open-source jihad” – and it’s their main focus in recruiting and operational guidance.

Bridget, I know you look a lot at the threat from external terrorism and inspired would-be jihadists. Are there any domestic terrorism threats, Islamic extremism aside, that you’re watching and are concerned about? I fear white supremacists and anti-Semitic neo-Nazis have been learning some lessons from foreign terrorist organizations about online outreach, organizing, propaganda and even ways to conduct lone or group attacks, while at the same time they’re emerging from the shadows and being bolder about recruiting others to their cause. Their lack of membership-card organization, much like networks of web-interconnected wannabe jihadists, makes their actual numbers harder to track – judging the extent of this threat by the number of hooded buffoons who show up for a cross burning is not by any stretch accounting for those who ascribe to hateful beliefs and may draw inspiration to terrorize a community from online materials or a community of the like-minded. There are more killers out there like Dylann Roof and Sikh temple shooter Wade Michael Page and, whether or not they’ll admit it, they’ll be picking up tips and tricks from Islamic extremist operations.

Most folks have a reasonable level of appreciation for how terrorism can disrupt their lives. When we’re dealing with complex geo-political threats, it can sometimes be harder to understand and appreciate the risks associated with nation-state threats and capabilities. Besides the threat of terrorism, what security concerns out there now should Americans be paying attention to and why do those matter? A great question, because I see too many attitudes trending toward insulation from events out there in the world, thinking (or hoping) they won’t affect us in here. Americans need to understand that bad actors aren’t content to sit in their global capitals and just be bad there, and the interconnectedness of bad actors on the global stage can, does and will harm the United States and our allies on economic and security levels. We got a taste here in the US of Russia’s extensive influence operations, and hopefully the Kremlin’s actions will raise awareness of the reach of their nefarious allies as well. Take, for instance, “isolated” North Korea’s chumminess with fellow bad guys, as Americans fear a nuke being able to hit our West Coast. The regime that sent assassins armed with deadly nerve agent VX to a public airport has been selling weapons, passing through Chinese harbors, to Bashar al-Assad. They sent Cuba weapons hidden under sugar, are providing slave labor for Russia to build a World Cup stadium, and have also enjoyed arms deals with Iran, Hamas and Sudan, whose president is currently a wanted man for crimes against humanity. Kim Jong-un helps supply all three designated state sponsors of terrorism. These relationships, like the trifecta of Assad, Iran and Russia, exponentially increase the reach of bad actors far beyond designated areas of conflict.

You’ve also spent a lot of time listening to and asking questions from senior government officials. As you watch this still new Trump Administration settling in, how do you think they’re doing on security issues? Anyone stand out as really “getting it” or any issues you feel are maybe not being properly addressed yet? Too soon to tell, but we’re seeing some marked disparities between those who get it (I don’t think there’s anyone on the Hill waking up in a cold sweat with fears about whether Secretary Mattis can handle the weight of national security) and those who don’t – sometimes due to sheer lack of experience – and hoping that the “get it” voices win out, particularly when open positions get filled. That in itself is a concern: I’ve heard, for example, from some anti-regime Iranian activists who have been hampered in trying to get help at the State Department with its many vacancies. I’d like to see a strategy underpinned by recognition of threat complexity in the face of ISIS tunnel-vision rhetoric, concentration on the growing homegrown threat with the recognition that terror groups have little need anymore to import terrorists into any country, and understanding that soft power including rock-solid support for human rights and development aid are key pieces in the security picture.

If President Trump came to you and said, Bridget, I’m meeting with the Secretaries for Homeland Security, State and Defense, 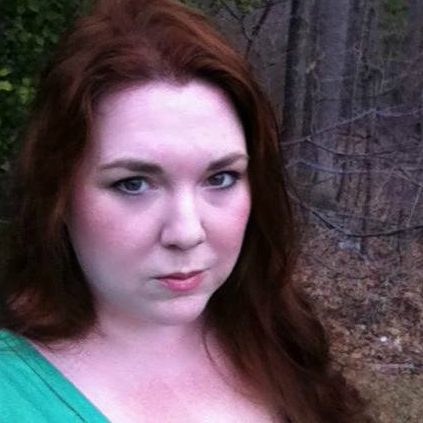 what am I giving them as priorities? Your guidance would be…? The team needs to focus on their respective duties in these six anti-terror plan elements: intelligence, collaboration with Muslim communities and nations, interdiction when preventive measures are not enough, military operations, counter-messaging including tackling the glut of jihadi communications via social media and Telegram, and comprehensive coverage of all terror groups and regions. One of those particularly jumps out as an area in which all three secretaries have unique roles to play, have to get it right and need to get started right away, and that’s building serious, lasting cooperative relationships from the littlest mosque in America to Gulf royal families. It’s not just about counting on their alert eyes to spot potential attackers, but reaping ideas from their experience to build up deterrence capabilities that can help stop a would-be terrorist before he or she is inspired to act by mountains of propaganda. On the point of focusing on all regions – especially Africa, which has been back-burnered too often, to their detriment and ours – I would stress that, as we continue to learn, terrorism is globalized. Hoping you can contain terror to certain pockets of the world, I’d remind the secretaries, will never work.

If someone reading this interview wants to learn more about you or see more of your writing and analysis, where should they go? Follow me on Twitter at @Bridget_PJM for links to my latest stories and analysis, periodic mocking of the silliest ISIS propaganda and occasional photos of my non-terrorist (most of the time, grading on a curve) pets.

Bridget, thanks for taking time out to share your thoughts and ideas with me today! And, thanks for all you’re doing to provide seasoned, measured perspective and analysis to the security threats and issues facing our country today. Thank you for all that you do!