Shortly after 3 p.m. on 31 Oct., a flatbed pickup rented from Home Depot pulled onto the West Side Highway bicycle path in Manhattan, which is wide enough to accommodate vehicles, and drove for several blocks striking cyclists and pedestrians until colliding with a school bus at Chambers Street. The driver then got out and wielded two guns, which turned out to be a paintball gun and a pellet gun, and was shot in the abdomen by a uniformed NYPD officer. Eight people were killed and several more injured. The driver, identified as Sayfullo Habibullaevic Saipov, survived his wound.

“He did make a statement when he exited the vehicle,” New York Police Commissioner James P. O’Neill told reporters. “And if you just look at the M.O. of the attack – that’s consistent with what’s been going on. So, that, along with the statement that’s enabled us to label this a terrorist event.” Witnesses reported Saipov shouting “Allahu Akbar” during the crime.

Saipov’s kiddie-guns gambit didn’t get him the suicide-by-cop he apparently sought. Now he’ll be interrogated and dragged in front of a judge, scenes ISIS doesn’t really want to own.

Saipov, 29, arrived in the United States in 2010 and stayed with a family in Ohio before 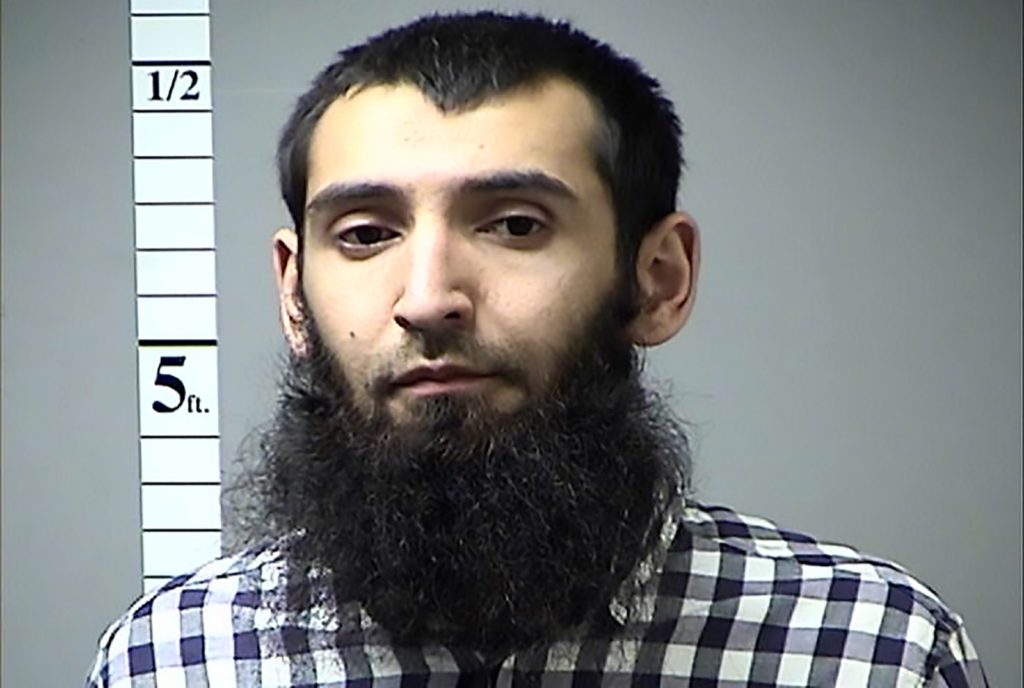 finding work as a truck driver and moving to Florida, according to the New York Times. He later moved to New Jersey. Uber confirmed that he was a driver for their company –
and, bearing a green card, had passed a background check. The company said it was reviewing Saipov’s history and cooperating with the FBI.

In October 2016, Saipov was arrested by the Missouri Highway Patrol on an outstanding warrant for failure to pay a traffic citation (the violation was failure to maintain required brake system). He didn’t show for his hearing the next month and the $200 bond he’d posted was used to pay the traffic fine and court costs.

A note was reportedly found in the truck referencing ISIS, in keeping with the terror group’s admonition to lone jihadists that they need to leave some tangible sign of their allegiance at the attack scene, in their residence, etc. ISIS does, however, prefer their lone jihadists to move on to another attack or meet their martyrdom, and Saipov’s kiddie-guns gambit didn’t get him the suicide-by-cop he apparently sought. Now he’ll be 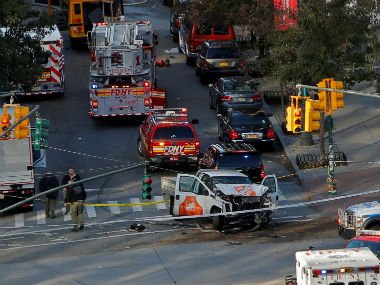 interrogated and dragged in front of a judge, scenes ISIS doesn’t really want to own.

ISIS does love vehicle attacks, however, and have been pushing lone jihadists toward this method that can inflict heavy casualties, avoid ensnaring would-be terrorists in gun regulations, be executed while drawing little suspicion, and require just rudimentary advanced planning. The vehicle-ram method, as shown in Nice, Berlin and Stockholm attacks, fits with the terror group’s call to go for softer and softer targets.

In apparent frustration over Ohio State student Abdul Razak Ali Artan ramming people with a sedan in November 2016, causing no fatalities, and March 2017 Westminster Bridge attacker Khalid Masood using a Hyundai Tuscon to run over pedestrians, ISIS included a remedial infographic in the May issue of their Rumiyah magazine to push

jihadists to get a cargo truck. Consistent with their tutorials that assume lone jihadists to be not that bright, the infographic showed in pictures where to get an appropriate vehicle for ramming: buy, rent, steal, or borrow from a disbeliever or apostate. “The ideal vehicle,” said the graphic, has a “slightly raised chassis and bumper,” is a “double-wheeled, load-bearing truck” that is “large in size, heavy in weight” and is “fast in speed or rate of acceleration.”

The suggestions for targets used photos of an outdoor LGBT event, a busy London street next to an Underground stop, a seaside outdoor market and a May Day rally in Paris.

This puts the person working at a location renting moving vans or heavy trucks in an unenviable position of knowing that someone may come to them wanting to lease what is essentially a weapon of war, but not being – or expected to be – an expert in criminal behavior or counterterrorism able to spot warning signs. Businesses leasing a truck for the day aren’t going to be interrogating customers about whether they’re moving knickknacks between apartments or have no intention of using the cargo bay whatsoever.

Employees should always report words and actions deemed suspicious, but stopping vehicle terrorists at the point of rental can never practically be the sole or last line of defense as terror groups urge not only soft targets but household methods. Still, even though the planning trail may look nonexistent, there remains a multifaceted evolution from zero to terrorist. We’ve seen some patterns in many of the Western jihadists, such as a noticeable change in religious observance, overseas travel, domestic violence and even an interest in security-related jobs.

Stopping home-soil terrorists before they commit heinous acts ultimately comes down to, in varying degrees, counter-messaging, intelligence, interdiction in which reported warning signs are given attention, and robust collaboration with communities and mosques. When someone is turned to the ideology of ISIS or al-Qaeda, it’s those closest to the would-be terrorist who will notice more amiss than the guy at the truck-rental counter will ever catch.

Protest and demonstrations are planned in the US and worldwide this weekend and through next week, relating to independence movements, the Million Mask March, US elections and other issues. Participants are encouraged to review our 17 August blog “After Charlottesville: Future Protest Security & Safety Considerations.”