It goes without saying that the Federal Aviation Administration Extension, Safety, and Security Act (FESSA) has interesting provisions regarding domestic drone operations. Indeed, upon initial review, drone operators who peruse Subtitle B – UAS Safety, will see some reasoned thinking about the future of drone integration into the lower aviation airspace. However, if you look more closely, particularly with regard to Section 2209, you will see an area of potential concern for drone operators.

(a) Applications for Designation.–Not later than 180 days after the date of enactment of this Act, the Secretary of Transportation shall establish a process to allow applicants to petition the Administrator of the Federal Aviation Administration to prohibit or restrict the operation of an unmanned aircraft in close proximity to a fixed site facility.

(A) In general.–The Administrator shall establish the procedures for the application for designation under subsection (a).

(B) Requirements.–The procedures shall allow operators or proprietors of fixed site facilities to apply for designation individually or collectively.

(C) Considerations.–Only the following may be considered fixed site facilities:

(i) Critical infrastructure, such as energy production, transmission, and distribution facilities and equipment.

(iv) Other locations that warrant such restrictions.

(A) In general.–The Secretary shall provide for a determination under the review process established under subsection (a) not later than 90 days after the date of application, unless the applicant is provided with written notice describing the reason for the delay.

(i) the boundaries for unmanned aircraft operation near the fixed site facility; and

(ii) such other limitations that the Administrator determines may be appropriate.

(C) Considerations.–In making a determination whether to grant or deny an application for a designation, the Administrator may consider–

(ii) protection of persons and property on the ground;

(D) Opportunity for resubmission.–If an application is denied, and the applicant can reasonably address the reason for the denial, the Administrator may allow the applicant to reapply for designation.

Upon review, there is nothing inherently alarming about the initial premise of 2209 as it endeavors to provide a “process” for an applicant to apply for permanent flight restrictions for their particular facility if it is classified under the enumerated terms identified for critical infrastructure. However, for drone operators, that is where good intentions end and governmental ambiguity begins.

Examined more closely, it is noteworthy that critical infrastructure is identified as follows “Critical infrastructure, such as energy production, transmission, and distribution facilities and equipment.” However, if you are not well versed in energy operations, which I presume most drone operators are not, then it is time to understand. The presumption (an assumption on my part) here is that the Government is talking about things like generation stations and substations, which have the elements of, and indeed are part of, transmission and distribution. Here is where one part of this two part problem lies.

Part 1: Under this currently vague premise, it is not altogether unforeseeable that an energy company may apply to have an entire critical transmission path, or for that matter distribution path, placed under flight restriction. Indeed, there are many transmission paths that are becoming more and more critical as a result of fossil fuel removal (see: https://www.linkedin.com/pulse/cpp-security-consequences-transmission-reliability-travis-moran?trk=mp-reader-card.) Moreover, the importance of distribution pathways are also becoming more critical dependent upon what they serve. From a critical infrastructure and resiliency framework, these applications make good sense. From a drone operators perspective they may well highlight peril. Some of these transmission pathways cross thousands of miles point-to-point, i.e. from generation stations to transmission substations, then transmission substations to distribution stations on to commercial and residential customers.[1] If entire pathways are granted overflight restrictions, expedient and efficient drone travel times go out the window, not to mention battery life, particularly if Beyond Visual Line Of Site (BVLOS) rules are more liberalized. The transmission map shown in Figure 1. elegantly highlights this point in that there are over 400,000 miles of electric transmission lines in the United States. 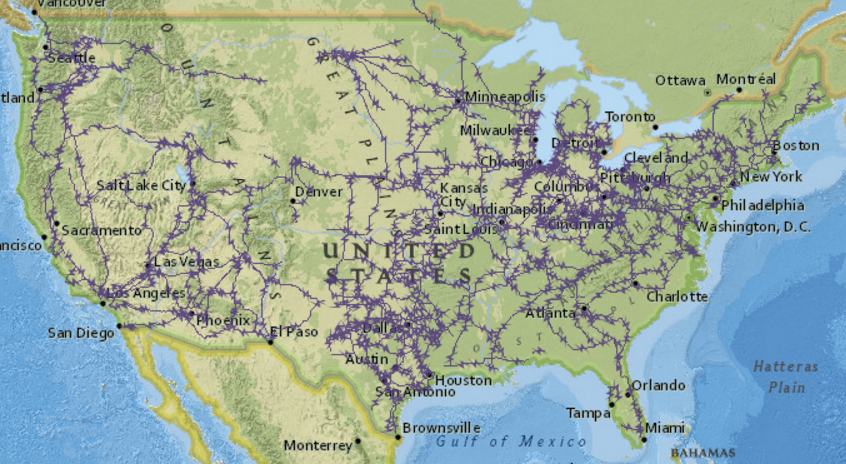 Part 2: There are over 55,000 100 kV or above electricity substations in the United States which literally covers the entire map.[2] Moreover, there are an additional 7,000 plus generation stations in the U.S. Not all of them are big megawatt producers, but quite a significant number are.[3] As further represented in Figure 2, the magnitude of the problem of identifying what should be included in a no fly zone with regard to critical infrastructure is daunting, particularly with regard to drones. And remember, this map just represents power stations, it does not include electricity substations. Nor does it include gas and oil transmission lines or refineries, or critical rail lines. I invite anyone to peruse the Energy Information Administration’s layering map to get a full grasp of the magnitude of the lower airspace problem for drones/UAS when considering delivery and longer flight missions. 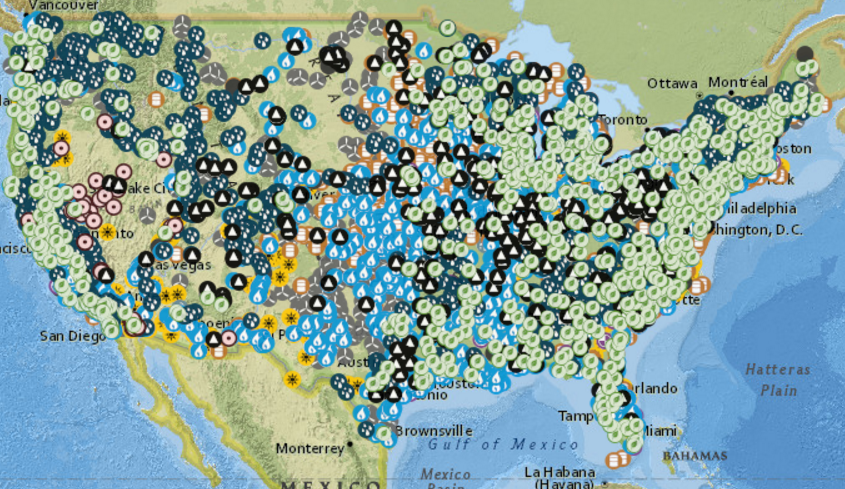 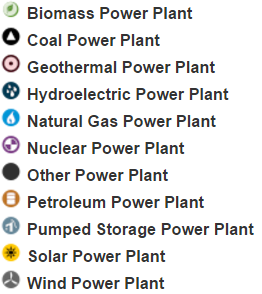 I have just briefly highlighted the enormity of just a few parts of the critical infrastructure problem in the United States for drone operators. When we add up just the electrical facilities, we are in excess of 62,000 facilities with more and more being brought online every day. If we were to further extrapolate and include all the chemical, oil, railways, data centers, financial centers, and any of the other pieces of Presidential Policy Directive 21 that constitutes the 16 total critical infrastructure sectors, the amount of areas that could have the potential for drone flight restrictions is truly mind-boggling.[4] It should come as no surprise then that this should be alarming for the drone industry. If just 10 percent of the facilities represented by these industries are placed under permanent flight restrictions, vast swaths of efficient, direct, door-to-door pathways are out of bounds for drones. Moreover, dependent upon how large the protective zone around a protected facility is, many other legitimate drone operations could be barred as well.

So is it Just About Drones?

Apparently so. As some astute followers have questioned in private conversations, how is this really scalable just to drones, what about fixed-wing aircraft? Indeed. This topic has come up in the past and there are actual documented events of individuals using fixed-wing aircraft to attack transmission wires. So why not included fixed-wing aircraft as well in all of this. Two reasons:

Who Gets to Decide?

The Act tells us the industries and types of facilities (somewhat vaguely) that will be eligible to apply for permanent restrictions upon enactment. One of the problems is, who gets to decide just what types of facilities or equipment are eligible for the extra protection, and what actual criteria are they going to use? DHS? DOE? FAA? Or some combinations of all of them or even more agencies such as TSA, DOT and on and on? How will these facilities be ranked? What is the methodology for inclusion or exclusion? All are very important questions and are just scratching the surface of this issue. And just what does (iv) “Other locations that warrant such restrictions” mean anyway?

The Beginnings of a Solution:

Initially, I was mostly concerned about this problem from the perspective of the threat of drones to critical infrastructure (CI) and sought a way forward for CI to exclude drones from their facilities. However, as I have become more learned on the positive aspects of drone usage – both from the current and potential future states – I see both points of view. As such, I have previously proposed a semblance of a solution which goes something like this:

Who is Going to Pay for All of This?

The problems and potential solutions I have outlined are, by anyone’s guess, enormous. This is quite simply another whole mini-bureaucracy to effectively manage. Which begs the question, who is going to pay? Is this something that is primarily a taxpayer driven program? Or, is it one that is partially supported by application fees on the behalf of the owners and operators and will it be a one-time expense or will there be annual renewal fees? If so, guess what, base rate increases for all types of things will most likely be passed along to consumers to include electricity, gas, and water and so on.

What Drone Operators Need to Do:

The aforementioned scenario assumes that there is a voice for drone operators on the committees that are crafting this application and potential certification process. However, one thing my law enforcement career taught me is that assumptions are almost always wrong and they can get you hurt. My experience both inside and outside government has been that when the true policy derivation is happening, the voices that are often needed the most are only considered from the construct of policy memos and position papers. Once these issues get into congressional committees or White House working groups, access and influence can become more distant, despite whatever impressions advocates have. Indeed, ask anyone who has been through the legislative process if what they originally intended is what actually came out of committee? So what is the takeaway? Drone operators need to be vigilant and vocal on this issue. The ambiguity with regard to 2209 is nothing to take lightly. And if you think these musings are too farfetched, take a look at Florida Senate Bill 2017-832 which addresses drones and critical infrastructure. Tucked into the bill is the following provision defining certain “Critical infrastructure facility:”

Ignoring everything else, some of which makes perfect sense, the pipeline provision is the area that can cause the problem for drone operators – particularly with regard to BVLOS operations. Take heed.