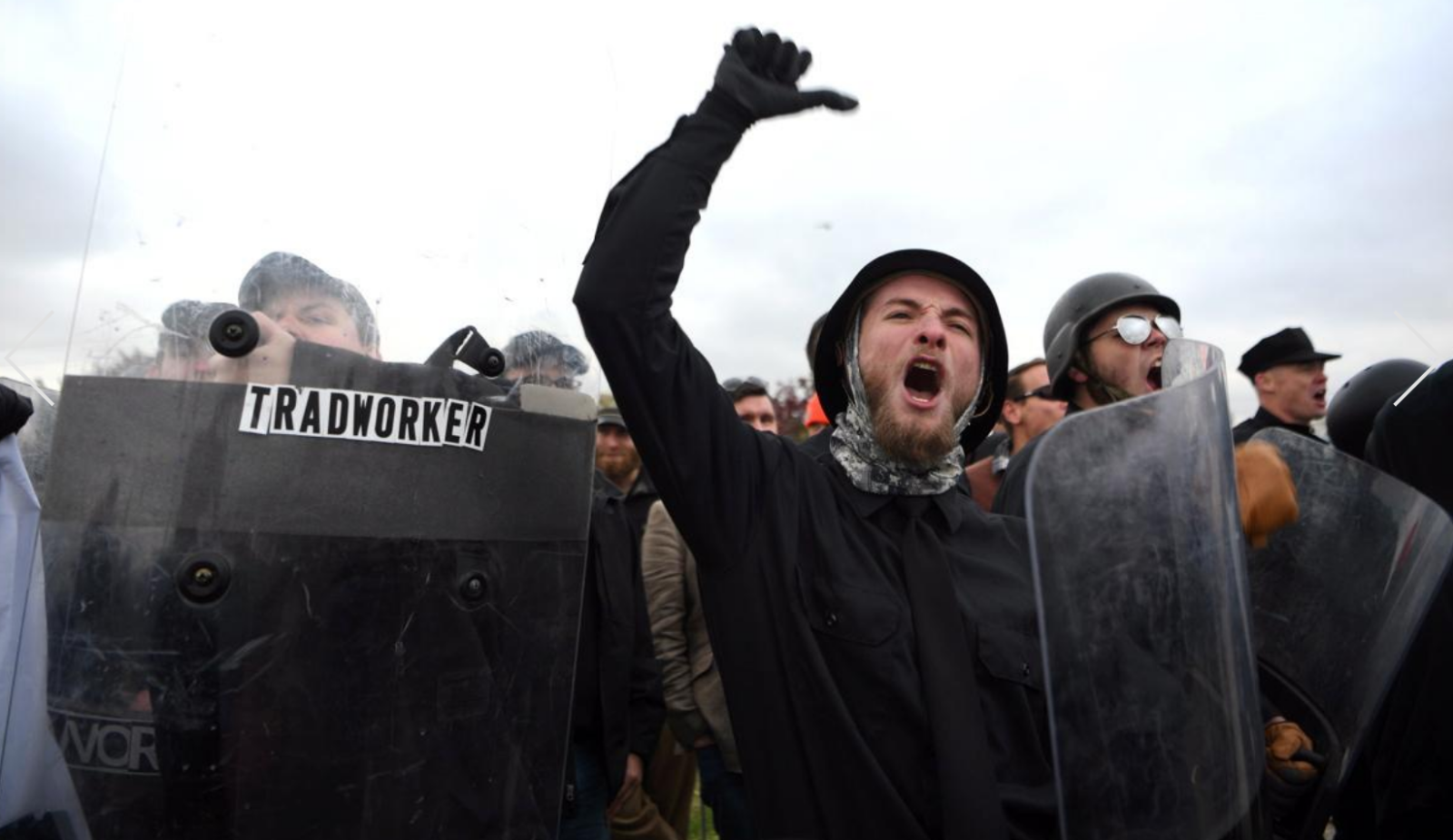 Good municipal planning and long security screening lines kept white supremacist rallies on 28 Oct. in two Tennessee towns peaceful – and appear to have even discouraged one of the nationalist groups from showing at the second event. Escalating street action and recruitment efforts, though, show the need for officials to monitor the evolution of these organizations and be mindful of the potential for violence surrounding their message.

The city of Shelbyville credited the “positive outcome” of the rally to “extensive planning along with the ability to keep the groups separated.”

Groups involved in the “White Lives Matter” events, according to extremist tracking at the Southern Poverty Law Center, included the League of the South, a neo-Confederate group favoring secession to form an “Anglo-Celtic” nation; the Nationalist Front, which intends to united 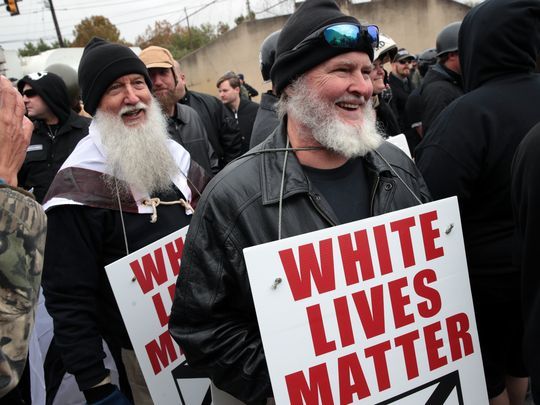 white supremacist and white nationalist movements; the Traditionalist Workers Party, which advocates for racially exclusive countries and communities; the National Socialist Movement, the largest neo-Nazi organization in the U.S.; and Vanguard America, the white supremacist group with whom James Fields was seen marching at the August rally in Charlottesville, Va., before he was arrested and charged with murder for plowing his car into counter-protesters (the group, which targets young men for recruitment including on college campuses, denied he was a member).

More than 170 faith leaders from the area united to release a statement in advance of the events. “This rally is not loving, it does not accord by the core tenets of our faiths, and it is not peaceful,” they declared. “…Gatherings like this one have no other end but the promotion of white racial nationalism.”

More than 170 faith leaders from the area united to release a statement in advance of the events. “This rally is not loving, it does not accord by the core tenets of our faiths, and it is not peaceful,” 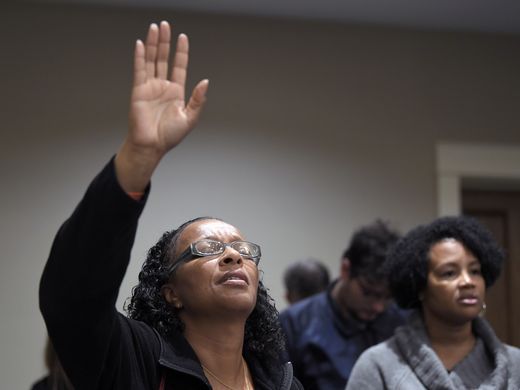 areas for protesters and counter-protesters. The League of the South advised the municipality of their protest in advance, though the rally did not require a permit as they assembled on a sidewalk at a street corner. Many businesses in Shelbyville chose to close for the day, while some chose to put up signs declaring that the white supremacists were not welcome. Counter-protesters also held a safety-awareness session in advance at a local church.

“White Lives Matter” organizers said they were in part protesting the 24 Sept. mass shooting at the Burnette Chapel Church of Christ in Antioch, Tenn., in which a legal U.S. resident originally from Sudan is accused of killing one worshipper and wounding seven others. Demonstrators in Shelbyville resurrected the “blood and soil” and “Jews will not replace us” chants heard in Charlottesville. As many as 300 rallied, with twice the number of counter-protesters. One 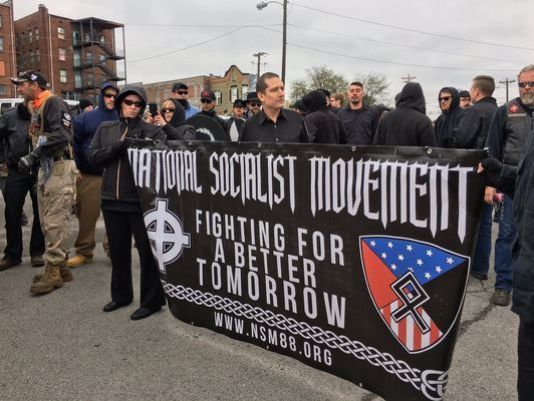 counter-demonstrator was taken into custody for disorderly conduct; his father told media that his son was put in a headlock by one of the white nationalists.

In a statement, the city of Shelbyville credited the “positive outcome” of the rally to “extensive planning along with the ability to keep the groups separated.”

Shelbyville and Murfreesboro were the site of League of the South rallies in 2013. Counter-protesters were ready for their return, and lined the route from Shelbyville to Murfreesboro. Law enforcement barricaded off a protest area in downtown Murfreesboro and screened demonstrators and counter-demonstrators at security checkpoints for banned items including firearms, knives, helmets, masks, liquids, sign poles or shields. As many as 1,000 counter-protesters passed through the metal detectors. About 30 white nationalists showed up, with the League of the South backing out at the last minute; one of the excuses offered by an organizer was that the security lines were too much of a pain.

In September, the New Jersey Office of Homeland Security and Preparedness assessed that violence connected to white supremacist groups was likely to increase; domestic extremists, their analysts noted, “have demonstrated their ability to mobilize quickly over political or social

issues.” White supremacist groups have discussed “flash mob” actions to catch would-be counter-protesters by surprise. Outside a 19 Oct. speech by white nationalist Richard Spencer at the University of Florida campus in Gainesville, three men who had traveled from Texas to support Spencer were charged with attempted murder after allegedly firing a gun at counter-protesters who had left the event area.

Recruiting efforts on college campuses have risen, with Rutgers recently littered with Identity Evropa fliers. The white supremacist group claims that minority groups are causing “white genocide” and, like its brethren at the Charlottesville and Tennessee protests, is highly anti-Semitic. Through their #ProjectSiege, the group has been posting recruitment fliers, brochures and business cards on campuses across the country; they’ve recently posted photos of their propaganda materials left at the University of Nevada, Las Vegas, Liberty University, Virginia Commonwealth University, State University of New York at Purchase, Arizona State University, Northern Illinois University and more.

Hundreds gather for prayer vigil before White Lives Matter. Gwendolyn James of Murfreesboro lifts her hand in prayer during One Community Prayer Vigil at First Baptist Church on Friday, Oct, 27, 2017 on Murfreesboro, Tennessee. Downtown Murfreesboro is the site of a White Lives Matter rally on Saturday, Oct. 28, 2017, photo by Shelley Mays, The Tennessean, via Daily News Journal, 27 Oct, http://www.dnj.com/story/news/2017/10/27/white-lives-matter-murfreesboro-prayer-vigil/807813001/