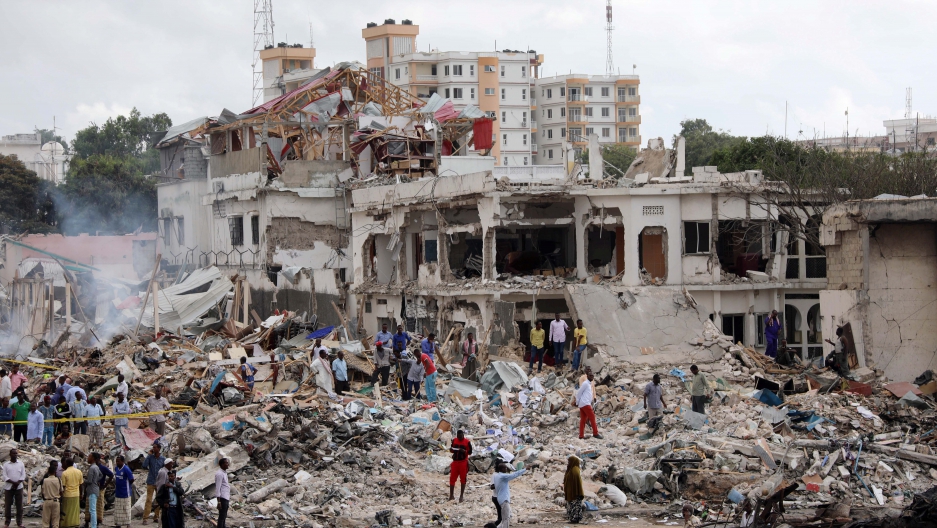 In a country where fortification of critical assets is second nature after years of war, terrorists still found a way to commit the deadliest attack on record in Somalia in a weekend blast that killed at least 276 and injured at least 300 more. The high casualty count at a busy intersection in the nation’s capital, with the presence of an unrelated fuel truck that made the explosion worse, 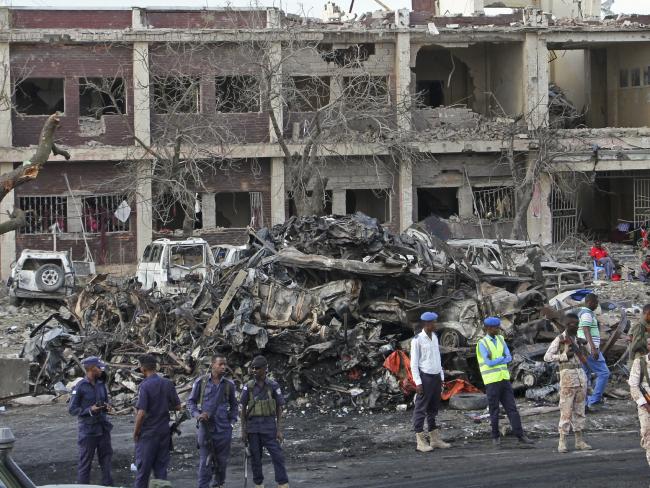 reminds Western nations that no one is immune to vehicle-borne improvised explosive devices being used with devastating effects in low-security areas.

The blast was so intense that authorities may not be able to identify all of the charred remains. The volume of seriously injured patients overwhelmed local hospitals while Somalis, showing their continued commitment to community as they’ve weathered years of Al-Shabaab attacks, lined up by the thousands to donate blood. Hundreds of angry Somalis also protested in the streets.

What made the blast so devastating? First, the sheer power of the device. The director of Mogadishu’s ambulance service told Al Jazeera that his office is about a kilometer away from the blast, and he’d “never heard anything that loud before… Buildings crumbled. Vehicles were burned and upside down. The tarmac was covered in flesh, blood and pieces of clothes. Our country has never seen anything even close to this.” He described a school bus caught in the explosion, with students burned alive inside.

The weapon was a truck reportedly packed with concealed homemade and military-grade explosives, with officials now tasked with finding the source of the latter. After being stopped at a routine checkpoint, the driver hit the gas pedal before the truck was searched and rammed through a barrier before detonating. 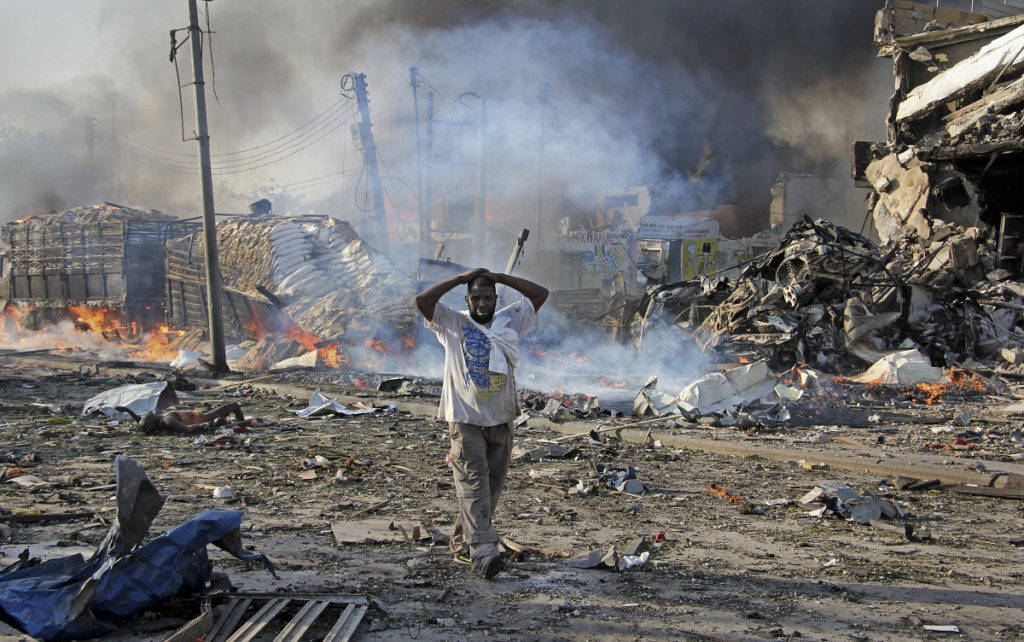 A secondary explosion dramatically magnified the effect of the VBIED: the truck bomb ignited a fuel tanker stopped nearby (there were gas stations along the affected road).

Then, location: The truck exploded at an intersection in the Hodan District, a busy part of town with hotels, restaurants, banks and shopping. The eight-story Safari Hotel collapsed. Several schools and universities are nearby. Somalia’s Ministry of Foreign Affairs is on the same street and just a short distance from the site where the truck detonated.

The time of the attack, 3:20 p.m. local time on a Saturday afternoon, also ensured that the intersection would be bustling.

Who bears responsibility isn’t a mystery to Somalis who have suffered under the boot of terrorism for too long. “Whether they claim or not claim makes no difference, we know the act that has happened, it’s al-Shabab,” former intelligence officer Abdi Hassan Hussein told VOA. “The information we are getting so far shows this is the work of al-Shabab, it has their hallmarks.”

Though their history of car bombings suggests otherwise, Al-Shabaab has shied away from claiming responsibility for the attack, and one can imagine that al-Qaeda central isn’t too pleased. Al-Qaeda has stressed – and this includes their affiliates – that the Muslim community

needs to see their terrorists as jihadists legitimately fighting “crusaders” for the benefit of Muslims, therefore they discourage slash-and-burn tactics in which there would be a high probability of Muslim civilian casualties and consequently a public relations setback.

“We avoid all such military operations that are beyond the understanding of common Muslims or repulse them away from the mujahideen,” stated a June “code of conduct” released by al-Qaeda in the Indian Subcontinent that vowed to pay damages to any harmed Muslims. “…We consider it absolutely wrong to cause blasts in public gatherings, including masjids, funerals, markets and courtrooms, where there is a possibility of hurting common Muslims.” They have no such considerations, though, for the majority of Western targets, as seen with the 9/11 attacks that did not discriminate by the religious or ethnic backgrounds of civilian workers in the World Trade Center.

As much as cities shore up high-value targets, utilizing concrete barricades, security posts and other measures to stop vehicle-borne IEDs from detonating at government buildings, airports, embassies and the like, the Mogadishu blast underscores the devastating impact of strikes – as the West has seen with vehicle ramming attacks – that result in significant civilian casualties conducted in settings not considered security priorities.

Stopping a Mogadishu-style truck IED here has to happen before the point the impact, as every populated street can’t be blocked off with security berms and every vehicle capable of carrying a significant amount of explosives can’t be searched. The Somalia attack suggests the attacker knew 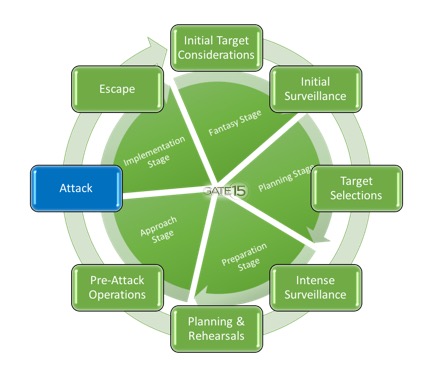 his target and deliberately planned the attack to cause maximum carnage. Such planning follows a routine process we refer to as the Hostile Events Attack Cycle, a process followed in most planned hostile event attacks. As with other methods of terrorist attacks interdiction in the planning stages is critical, and can include clues such as the would-be terrorist’s behavior, purchases/rentals and communications. VBIED drivers may stage attack rehearsals or may even seek treatment for chemical burns or other injuries resulting from constructing the weapon. Depending on threats, events and specific venues, choke points and screening points may be established to impede the path of a truck bomb.

Featured image: Somali government forces and civilians gather at the scene of an explosion in KM4 street in the Hodan district of Mogadishu, Somalia, 15 Oct 2017, Credit: Feisal Omar/Reuters, via PRI, https://www.pri.org/stories/2017-10-15/somalia-has-suffered-one-its-worst-attacks

Top image: Somali security forces and others gather and search for bodies near destroyed buildings at the scene of Saturday’s blast, in Mogadishu on Sunday. Credit: APSource: AP, via news.com.au, http://www.news.com.au/world/africa/somalia-suffers-deadliest-attack-in-its-history-after-horrific-twin-truck-bombs/news-story/6ba2c7f14ee223b75e8fcd4f8b4dccb5

Second image: A Somali gestures as he walks past a dead body, left, and destroyed buildings at the scene of a blast in the capital Mogadishu, Somalia, Saturday. Credit: Farah Abdi Warsameh/AP, via Military Times, https://www.militarytimes.com/news/2017/10/15/231-killed-in-deadliest-single-attack-in-somalias-history/