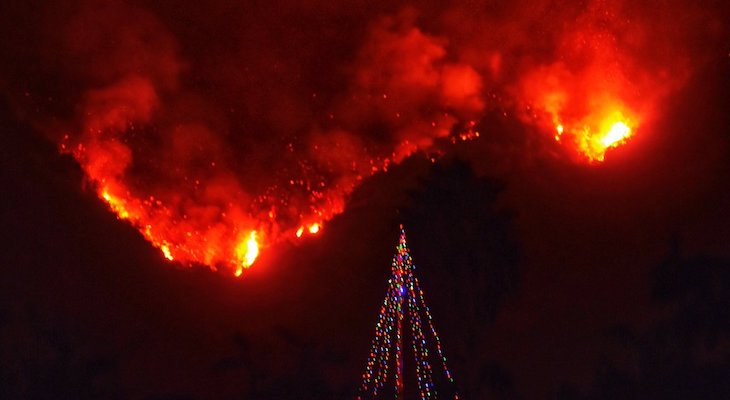 Wildfires that have been chewing through Southern California, with not much relief currently in sight from the biggest blaze straddling Ventura and Santa Barbara counties, have demonstrated the region’s skill in evacuations and fire prep but have also unnervingly piqued the interest of the Islamic State yet again.

The power of arson suggestion pegged to California’s current events should be something fire management officials, law enforcement and private-industry stakeholders bear in mind

Most of the updates on CalFire’s list are positive: 100 percent containment for blazes such as the Lilac Fire in San Diego County and the Rye Fire near Santa Clarita. Not so in what’s now the third-largest wildfire in the state’s history: the Thomas Fire, which has ripped through more than 267,000 acres and more than 1,000 structures, and is just 40 percent contained as fierce winds 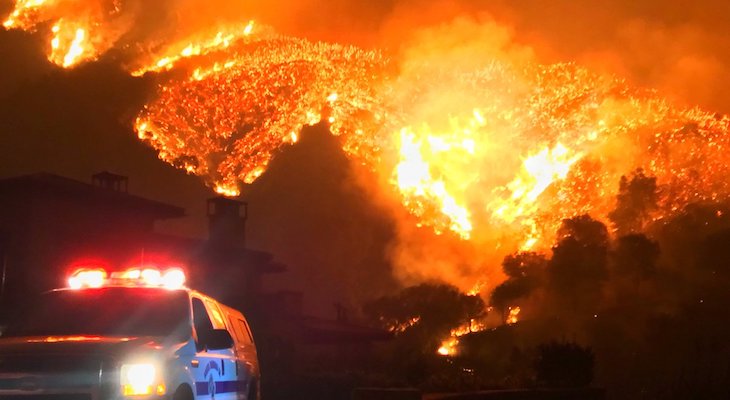 keep expanding evacuation areas in Santa Barbara County. About 8,500 fire personnel with nearly a thousand engines and 34 helicopters are battling the blaze.

The disasters have been an unfortunate way of highlighting Southern California’s skill at fire management. There have been spine-chilling moments, to be sure, such as when early-morning commuters shared video from the 405 with the Skirball Fire raging on the Sepulveda Pass right next to traffic; the notoriously busy freeway was eventually closed for nine miles in both directions. (Californians remember well when fire jumped the Cajon Pass east of L.A. in 2015, scorching cars on Interstate 15 as motorists ran for their lives.) Still, there has been a lone civilian casualty in an evacuation accident, in addition to one firefighter killed battling the Thomas Fire on 14 Dec.: fire apparatus engineer Cory Iverson, 32, worked for the California Department of Forestry and Fire Protection’s San Diego unit.

The blazes have also rekindled terrorists’ long-simmering fascination with arson as a tactic in the right place with the right natural accelerant.

The disasters have been an unfortunate way of highlighting Southern California’s skill at fire management… The blazes have also rekindled terrorists’ long-simmering fascination with arson as a tactic in the right place with the right natural accelerant.

Like with the October fires up north in wine country, where the cause of the Sonoma fire is still under investigation, ISIS has not taken credit for any of the blazes. But as the terror group did back then, they recently reignited reporting on California wildfire details in their weekly newsletter, al-Naba.

The article in ISIS’ 7 Dec. issue (they jumped on the news fast, considering the now-gargantuan Thomas Fire started 4 Dec.) noted that “a rapid fire destroyed forests and hundreds of houses in and around Ventura in the state of California” and “the fire broke out in the evening at the foot of the hills near the city” before being “driven swiftly by the wind toward the northwest.”

ISIS went on to discuss out-of-control blazes. They noted how California Gov. Jerry Brown declared a state of emergency to make available “funds and resources needed to assist more than 1,000 people.” They mentioned the one civilian death thus far, a 70-year-old woman from Santa Paula who authorities said died in a car crash while fleeing the Thomas Fire.

As firefighters battled the blazes up around Napa two months prior, ISIS printed an al-Naba news brief noting the property damage estimates and death toll of blazes as “worst in the history” of the state. They also pointed out that “strong winds hindered the efforts” of firefighters to save lives and homes.

While the terror group uses the bulk of al-Naba to focus on battles within claimed or disputed Islamic State territory, they’ve expanded their editorial coverage area a tad since the apparent demise of Rumiyah magazine – the multi-language outreach publication that hasn’t kicked out a fresh issue since September. They’ve used al-Naba sparingly for claims, i.e. Las Vegas mass shooter Stephen Paddock (authorities still say investigation has revealed no ideological motive in his 1 Oct. crime), and for simply mentioning attacks in a news format when they really don’t want to take credit, as was the case this past week with their dismissive treatment – acknowledgment sans acceptance of the bomber’s professed loyalty – of New York City subway IED novice Akayed Ullah. But they’ve also sometimes used al-Naba to highlight actions they just think are good ideas: case in point how, out of many busted terror plots, they wrote in their 30 Nov. issue about an Australian New Year’s Eve terror plot that would have caused “catastrophic” casualties in “one of the most important centers where Christians meet,” Melbourne’s Federation Square.

In January, the dustbinned Rumiyah laid out a case for why arson was a hot terror tactic and schooled would-be jihadists on how to became a firestarter for jihad. Match-wielding 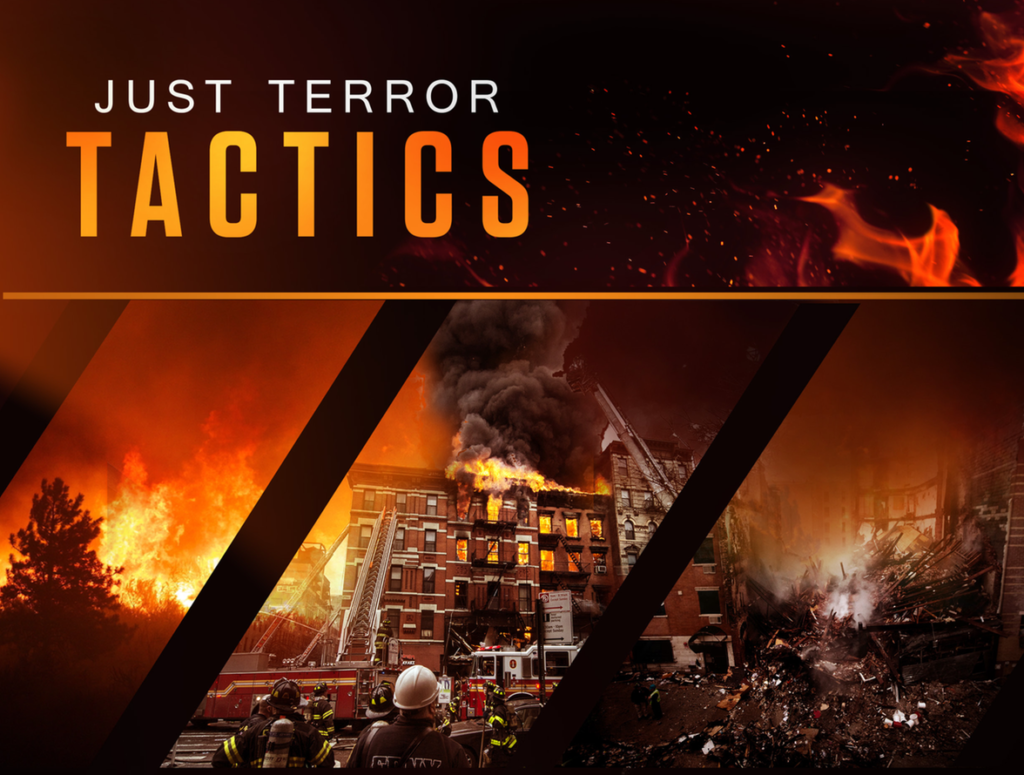 loyalists were advised to time their arson “preferably in the later part of night to the early hours of morning when people are generally asleep” and, if starting a wildfire, to look for dry brush “as fire cannot endure in damp or wet environments.”

“Incendiary attacks have played a significant role in modern and guerrilla warfare, as well as in ‘lone wolf’ terrorism,” the magazine told jihadists, underscoring “the lethality of such an effortless operation.” Arsonists were encouraged to leave ISIS’ mark somewhere near the fire’s point of origin, such as with spray paint.

The repeat mentions of California wildfires in recent terrorist propaganda clearly indicate that they want to get the wheels turning in the heads of occasionally dim-bulbed lone or cell jihadists, especially ones who can’t get the hang of building bombs in their mum’s basement. ISIS and al-Qaeda want attacks that are simple, tailored to a jihadist’s skill or access, potentially serial in nature, don’t alert authorities in the planning stages, and are devastating in terms of loss of life or economic impact.

As many lone jihadists fall outside the profile of the majority of arsonists by operating from a motivation other than money, mental incapacity or just sheer anger, a terror arsonist may more easily evade detection. Buying supplies for such an operation wouldn’t arouse suspicion, and there likely won’t be practice runs in the backyard before a terrorist arson.

The power of arson suggestion pegged to California’s current events should be something fire management officials, law enforcement and private-industry stakeholders bear in mind as regions are cloaked in red-flag fire-danger warnings.

Church on fire, from the Islamic State’s Rumiyah, January 2017 issue